This article aims to summarise the recent decisions of the Australian Federal Courts in relation to the high profile Tennis Star Novak Djokovic for allegedly failing to meet the Australian COVID-19 vaccination rules, and consequently the cancellation of his visa. Summary of Mr Djokovic’s Case  Mr Djokovic’s first submission was made through the Federal Circuit […] 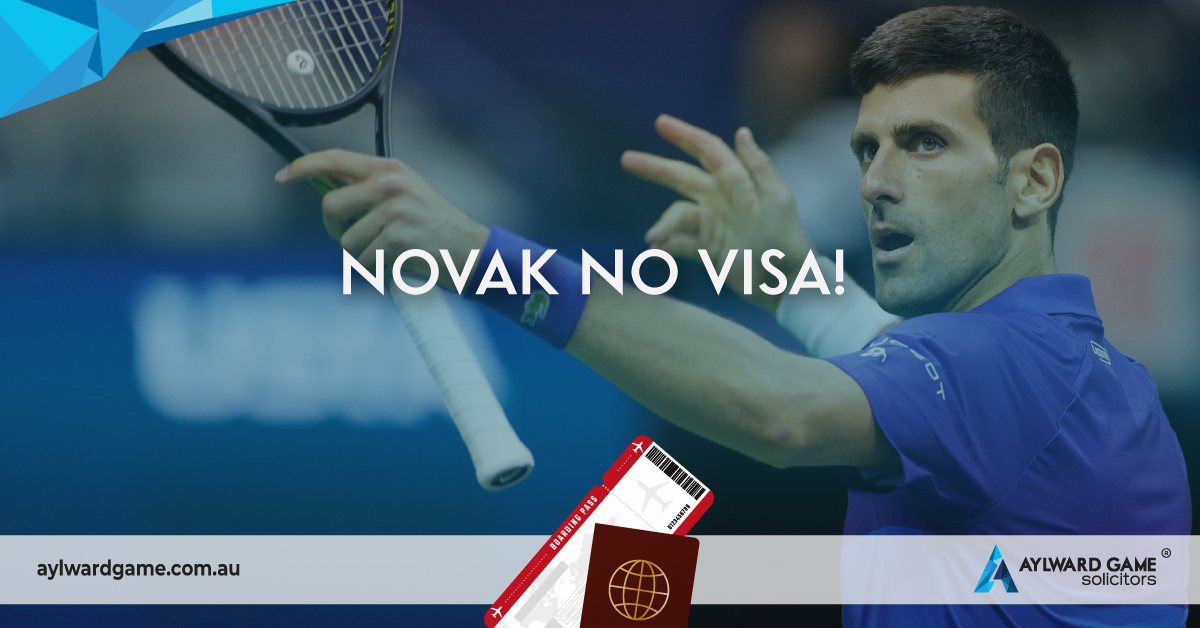 This article aims to summarise the recent decisions of the Australian Federal Courts in relation to the high profile Tennis Star Novak Djokovic for allegedly failing to meet the Australian COVID-19 vaccination rules, and consequently the cancellation of his visa.

Mr Djokovic’s first submission was made through the Federal Circuit and Family Court of Australia. In essence, and based on the submissions made by his legal representative, prior to his arrival to Australia on 5 January 2022, with a view to competing in the Australian Tennis Open, he held a Temporary Activity (subclass 408) visa, which was granted to him on 18 November 2021.

Mr Djokovic had received, on 30 December 2021, a letter from the Chief Medical Officer of Tennis Australia recording that he had been provided with a ‘Medical exemption from COVID vaccination’ on the ground that he had recently recovered from COVID. The date of his positive COVID PCR test was recorded on 16 December 2021. Unless a person qualifies for an exemption, to enter Australia from overseas a person must show that they are fully vaccinated against COVID 19.

Mr Djokovic’s Exemption Certificate had been provided by an Independent Medical Review panel commissioned by Tennis Australia. In addition, the decision of that panel had been reviewed and endorsed by an independent Medical Exemptions Review Panel of the Victorian State Government. It was submitted on his behalf that the conditions of the exemptions are consistent with the recommendations of the Australian Technical Advisory Group in Immunisation (“ATAGI”). He understood that he was entitled to enter Australia and Victoria and to compete in the Australian Tennis Open.

Mr Djokovic’s visa was purportedly cancelled by a delegate of the Minster for Home Affairs in reliance of section 116(1)(e)(i) of the Migration Act 1958 (Cth). However, Mr Djokovic submitted that the decision to cancel his visa was affected by a variety of jurisdictional errors as set out in his Amended Originating Application dated 7 January 2022.

The Minister submitted that Mr Djokovic’s presence in Australia may be a risk to the health of the Australian community. The Minister reasoned that Mr Djokovic was unvaccinated, “had indicated publicly that he is opposed to becoming vaccinated against COVID-19” and acted inconsistently with certain COVID-19 restrictions in the past.

The Minister also reasoned that Mr Djokovic’s conduct and position against vaccination against COVID-19 may encourage others to emulate him by reason of his high profile and status. The Minister further reasoned that, if others were encouraged to take up or maintain resistance to vaccination or to COVID-19 restrictions, then that would present a problem for the health of individuals and the operation of Australia’s hospital system.

The Minister further reasoned that orderly management of the COVID-19 pandemic is an aspect of the good order of the Australian community and that Mr Djokovic’s presence in Australia, by reason of his status and by reason of his publicly expressed views and conduct, may influence others not to be vaccinated or boosted or otherwise act inconsistently with public health advice and policies.

The Minister further reasoned that his presence may lead to rallies and protests that may themselves be a source of community transmission and may provoke opposing reactions, discord and public disruption at a sensitive time of the pandemic.

What was the Federal Circuit Court’s Outcome?

When the application first came before the Court, His Honour Judge Kelly ordered that the decision of the delegate to cancel Mr Djokovic’s Temporary Activity (subclass 408) visa made on 6 January 2022 be quashed, and the Minister pay his costs (including any reserved costs) as agreed or assessed. The Judge also ordered that the Minister forthwith take all necessary steps to cause Mr Djokovic to be released immediately from immigration detention and, Mr Djokovic’s passport and all other personal effects to be returned to him as soon as reasonably practicable after the making of this Order.

The Minister conceded that the delegate’s decision to proceed with the interview and make a decision to cancel Mr Djokovic’s visa pursuant to section 116 of the Migration Act 1958 (Cth) was unreasonable in circumstances where; at 5:20am on 6 January 2022 Mr Djokovic was told that he could have until 8:30am to provide comments in response to a notice of intention to consider cancellation under section 116. Instead, Mr Djokovic’s comments were then sought at about 6:14am and the delegate’s decision to cancel his visa was made at 7:42am. Mr Djokovic was thus denied the time until 8:30am to make comments. Had he been allowed until 8:30am, he could have consulted others and made further submissions to the delegate about why his visa should not be cancelled.

The Court was informed by the Minister’s legal representative that the Minister for Immigration, Citizenship, Migrant Services and Multicultural Affairs may consider whether to exercise a personal power of cancellation pursuant to subsection 133C(3) of the Migration Act 1958 (Cth).

What was the Federal Court’s Outcome?

Following the Orders of the Federal Circuit Court, the Minister announced that he had used his personal powers to cancel Mr Djokovic’s visa for a second time. Mr Djokovic’s legal representative then requested a judicial review by the Federal Court to appeal that decision. This led to the second Court hearing before the Federal Court. On 16 January 2022, the Federal Court comprising of their Honours Chief Justice Allsop, Justice Besanko and Justice O’Callaghan ordered that the amended application by Mr Djokovic be dismissed with costs, such costs to be agreed or failing agreement assessed. The Court will publish its reasons at a later date. This meant that following his losing appeal against the visa cancellation, Mr Djokovic must be deported from Australia.

Further details about the Case/Orders can be accessed/viewed via the following links: