The Rule in Jones v Dunkel 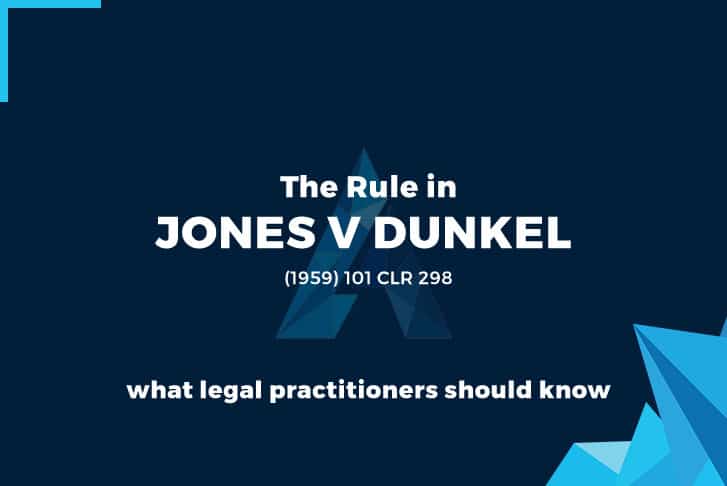 The tenet of this case is very handy and useful to both courts and legal practitioners. Basically, when there is an unexplained failure by either a plaintiff or defendant in civil proceedings to tender a document as evidence or call a witness, the court may draw an inference that the uncalled evidence would not have assisted the party.

The case concerned a civil negligence action. The High Court held that the jury should have been told that any reference favorable to the plaintiff from the evidence might be more confidently drawn when a person presumably able to put the true complexion on the facts relied on as the ground for the inference has not been called as a witness by the defendant, and the evidence provides no sufficient explanation for his absence.

Against the above background and since this case was decided, the courts have held that the mere absence of a witness does not necessarily support an inference that the witness would not have helped the impugned party’s case. That said, in RPS v R (2000) 168 ALR 729, the majority of the High Court expressed caution about the principle and said that:

“…it is essential to note its limits. It relates to the drawing of inferences or conclusions from other facts…the mode of reasoning which is described proceeds from the premise that the person who has not given evidence not only could shed light on the subject but also would ordinarily be expected to do so.”

In RPS, the trial judge directed the jury about the accused’s election not to give evidence and how – in the absence of his explanation, contradiction or denial – they might weigh the strength of the prosecution evidence. The jury found him guilty of four counts of sexual intercourse.

The particular difficulty with cases in line with RPS’s outcome is that— they mislead on the term and meaning of silence. When silence becomes impossible or when it becomes irresistible, how one should draw an inference, and whether that inference is the correct answer. That said, one thing is certain and that is— silence must be able to justify itself in a way that it would not invite speculation as to its meaning.