New laws and changes that affect Australia from January 1, 2018 and beyond

From January 1, new laws in Australia, there is a raft of changes coming to welfare, health, education, housing, gay marriage, and many other living expenses. This is what’s coming and how it may affect you and your family across Australia. WELFARE $10 million will be set aside for treatment services for job seekers affected […] 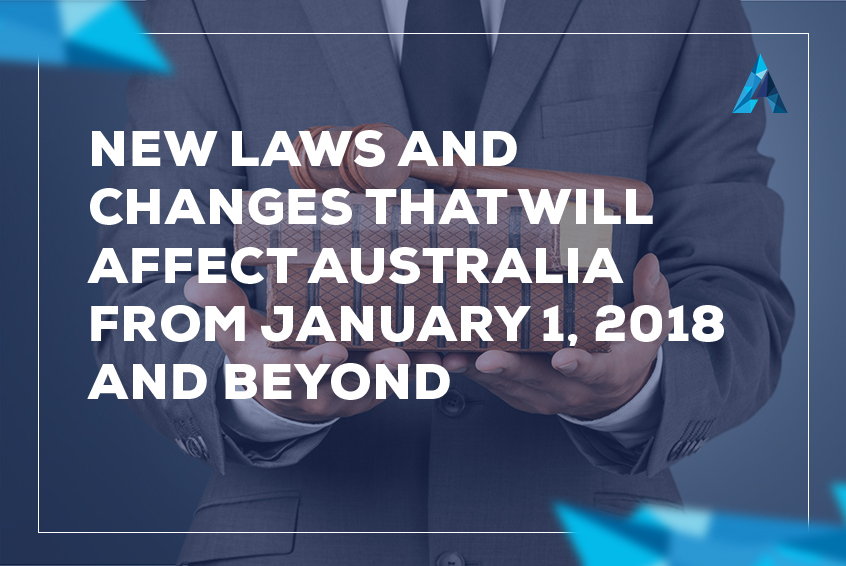 New laws and changes that affect Australia from January 1, 2018 and beyond

From January 1, new laws in Australia, there is a raft of changes coming to welfare, health, education, housing, gay marriage, and many other living expenses.


This is what’s coming and how it may affect you and your family across Australia.

Beyond these changes from January 1, there are more changes afoot for 2018. Some of them are below:

Single-use plastic bags will be gone at the check-outs of Woolworths and Coles in 2018. Woolworths revealed it would begin phasing out the bags in supermarkets, Big W, and BWS stores, with a total ban in place by June 30. The move sparked Coles to agree to do the same less than two hours later. Harris Farm Markets has also supported the move to phase out their bags. Western Australia will be plastic ban-free from July 1, 2018, and Victoria plans to set a date for its own plastic bag ban in 2018. NSW is now the only state in Australia that has not taken action to ban or reduce the presence of supermarket plastic bags.

After the House of Representatives passed the Gay Marriage Bill on December 7, same-sex couples will be able to legalize their union from January 9.

As part of the 2017-18 Federal Budget, the Australian Government announced the cashless debit card would be expanded to a third and fourth location. These two new locations will be the Goldfields region, Western Australia, and the Bundaberg and Hervey Bay region, Queensland. Both were selected based on support from the local community and high levels of welfare dependency. The card will come to these new locations from early 2018.

From March 2018, current 457 visa holders won’t be able to apply for Permanent Residency under the Direct and Employer Nominated Transition Streams if their occupation is not on the long and medium-term occupation lists. The current 457 visa program will also be abolished and replaced with the new TSS visa program. The TSS visa allows stays of up to two and four years.

A bill proposing new regulations to make partner visa sponsorship stricter is still before the Senate and is likely to not come into effect until 2018.

Victoria’s CityLink fees are increasing, adding up to $31.20 to an annual bill for drivers using the tollway every weekday. The maximum car toll per one-way trip rises to $9.13, up from $9.07. In NSW, tolls for the Cross City Tunnel, Eastern Distributor, Hills M2, and Lane Cove Tunnel will also increase. There are also changes to Airport link tolls in Queensland from Kedron to Toombul, Bowen Hills to Kedron, and Bowen Hills to Toombul.

From February 2018, codeine medicines Nurofen Plus, Panadeine, Mersyndol, and Codral become available only by prescription. Pain Australia has urged people who rely on these medicines to speak with their doctors to find alternatives.

Data breach notification will become mandatory as of February 2018 for all Australian entities required to comply with the Privacy Act 1988. When Federal Parliament passed the Privacy Amendment (Notifiable Data Breaches) Act 2017 last year, it started a process that means from February 22, 2018, all entities covered by the Australian Privacy Principles will have clear obligations to report eligible data breaches within 30 days. If an eligible data breach is confirmed, entities must provide a statement to each of the individuals whose data was breached or who are at risk and notify the Office of the Australian Information Commissioner (OAIC).

From July 1, 2018, the government has introduced an incentive for over-65s to downsize their homes, and make super contributions up to $300,000, outside the usual non-concessional (after-tax) contributions cap

From July 1, 2018, to receive Age Pension or Disability Support Pension (DSP), a person will need: